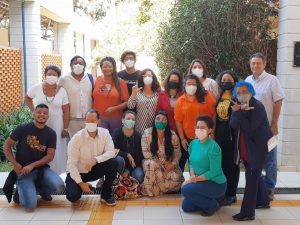 On June 23rd and 24th, CEPIA, represented by Karla Oldane, participated in the Preparatory Workshop of Brazilian Civil Society Advocacy for the Regional Conference on Population and Development of Latin America and the Caribbean, organized by REBRAPD in the Center for Population Studies “Elza Berquó” – NEPO / Unicamp – SP, with support from UNFPA Brazil and in partnership with ABEP and CEPIA.

The meeting, which was attended by organizations, collectives and researchers from various regions of the country, had as one of its central objectives, the construction of a document of analysis by civil society on the implementation of the Montevideo Consensus and the approval of a political declaration of civil society that was later delivered to all country delegations by the coordinator of REBRAPD Richarlls Martins, at the IV Conference held in Santiago, Chile, between June 28 and 30.

Public Act in Defense of Democracy in Brazil