Responsibility of media and ICTs to dismantle cultural stereotypes about women 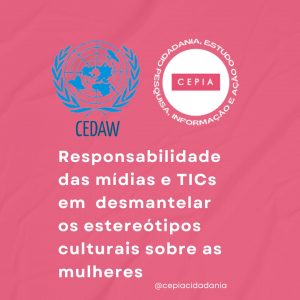 CEPIA, in line with the Convention on the Elimination of All Forms of Discrimination Against Women /CEDAW and its recommendations, especially Recommendation N.33, emphasizes the responsibility of the media and ICTs to “in dismantling cultural stereotypes about women” by changing such stereotypes regarding “gender-based discrimination and violence” as well as to raise awareness about women’s rights and strengthen ongoing public dialogue about women’s human rights.

It is our ongoing pursuit to “promote a culture and social environment in which women’s pursuit of justice is seen as legitimate and acceptable.

Our Body and Puberty – workshop with adolescents

The importance of Reconstruction of Human Rights Policies in Brazil

Collective manifestation of entities and social movements for the revocation of the guide “Technical Care for the Prevention, Evaluation and Conduction of Abortion Cases