What does it mean to be a mother of a teenager in this century?

CEPIA held the online conversationWhat does it mean to be a mother of a teenager in this century? , gathering 17 women, including mothers of teenagers and professionals who work with teenagers and their families. The meeting was facilitated by the mother of a teenager engaged in CEPIA’s youth program and from, CEPIA it was attended by Juliana Grisolia, Andrea Romani and Karla Oldane.

The main objective of the meeting was to promote a safe and welcoming environment for exchange between mothers sharing the challenges and learning of being a mother of a teenagers.

Some of the themes shared were the communication challenges between the two generations, and also the imbalance between fathers and mothers in the care and education of their daughters and son.

One of the participants said that she was able to open channels of dialogue with her teenage children through music. “At dinner time I started a conversation about what music she was listening to and I  talked about the songs I liked.”

Another mother commented “this circle was very important. I was silent but I saw myself in the voices of many of the other mothers “.

At the request of the participants, CEPIA intends to hold other meetings.

At the end they were asked how they were leaving the workshop. One of the main feelings  was Trust. 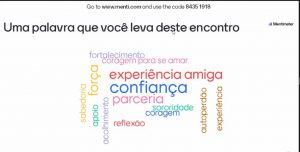 A Woman Can Make a Difference