After no,  it hurts my rights

CEPIA held 3 workshops during the month of May with students from the Orlando Villas Boas Public Municipal High School. The workshops called After no,  it hurts my rights. One of the workshops was held with  girls, another with boys and a third bringing together the two groups, always around reflections and content on the importance of differentiating affection from abuse, respect from violence, especially sexual violence.

The workshops took place on May 19th, 21st and 28th and were facilitated by the CEPIA youth team, Lucas Marçal, Debora Pinheiro, Debora Silva and Kezia Sampaio, with the participation of Pietra Alves.

As a result of the last meeting, the group chose to prepare two messages about coping with sexual violence, one for the family and the other for the school: 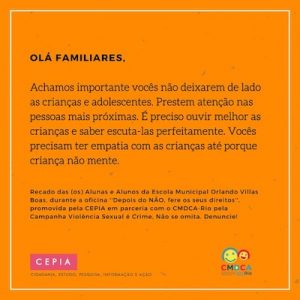 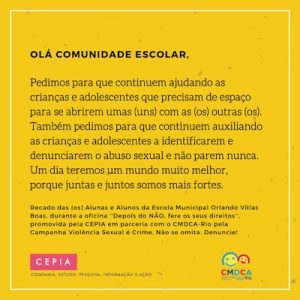 Is God friend of women?

Gender and Diversity: the Constituent Process in Chile