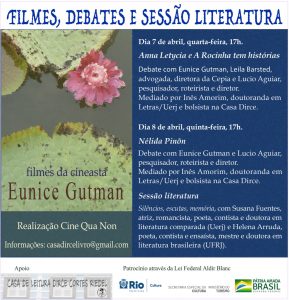 On April 7th, the filmmaker Eunice Gutman presented two of her films: Anna Letycia (Brazil, 1979) and A Rocinha tem Histórias (Brazil. 1985). The first film, proposes to show two aspects of the activity of the artist Anna Letycia, her artistic creation and her activity as a metal engraving teacher. The second film shows the reality of community schools, where children and educators, all of whom live in Rocinha, in Rio de Janeiro, are engaged in the struggle for the conquest of the social space necessary for the survival of the community.

Leila Linhares Barsted – lawyer and executive coordinator of CEPIA and Lucio Aguiar – researcher, screenwriter and director were invited to discuss the two films.

Population and Development in Brazil Today

Institutional Policy Memories Cycle: construction and dismantling of human rights and policies for women in Brazil

Covid’s Parliamentary Commission of Inquiry do not have any women