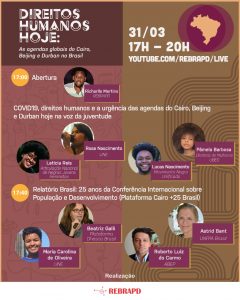 The Brazilian Network of Population and Development / REBRAPD will hold on March 31, starting at 5 pm, the Colloquium Human Right today: the global agendas of Cairo, Beijing and Durban in Brazil, broadcast live on https: // www. youtube.com/rebrapd/live 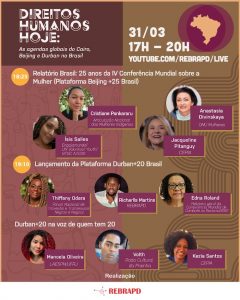 The meeting will bring together activists including Edna Roland, general rapporteur for the World Conference against Racism, Racial Discrimination, Xenophobia and Related Intolerance (Durban Conference) / 2001, Astrid Bant, representative of the United Nations / UNFPA Population Fund in Brazil, Anastasia Divinskaya , UN Women representative in Brazil, Jacqueline Pitanguy, former president of the National Council for the Rights of Women / CEPIA, Roberto Luiz do Carmo, president of the Brazilian Association of Population Studies / ABEP. CEPIA will also be represented by Kezia Santos, who along with other young people will participate in the session Durban + 20 in the voice of those who are 20.

The complete program can be accessed at: https://www.rebrapd.com.br/2021/03/direitos-humanos-hoje-as-agendas.html

Violence against Women: #Don’t even think about killing me