On September 2nd, CEPIA held its Ordinary Assembly. The meeting, which took place on a virtual basis, aimed at presenting to its associates and associates CEPIA’s activities and projects as well as its financial statements, which was fully approved. In celebration of the 30th Anniversary of its foundation, its Executive Coordinators read the 30-year Charter of CEPIA that retrieves the organization’s trajectory over the 3 decades of work. The letter can be accessed here. 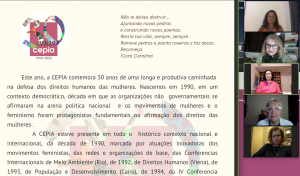 Webinar on Violence Against Women – Superior School of Law