Yesterday, October, 09th, at the Association of Public Defenders of the State of Rio de Janeiro – ADPERJ, held a conversation round about the law in the feminist perspective.

The conversation wheel, which began with Leila Barsted’s account and commented by Élida Lauris (Justice Forum); Flavia Nascimento (DPRJ); Ligia Fabris Campos (FGV -Rio); Ana Paula Sciammarella (UNIRIO); Mariana Imbelloni (PUC – Rio); Adriana Mota (AMB-Rio); Thux (Popular Legal Promoters-UFRJ) and other participants, was inspired by the book “Weaving Threads of Feminist Criticism of Law in Brazil”, organized by the Maria da Penha Law Consortium for the Fight against All Forms of Gender Violence against Women, rescues the reflections and debates of the “Workshop Weaving Threads to Discuss Feminist Criticism of Law in Brazil: Theoretical Production of Women’s Law and Civil Law from a Feminist Perspective”, held in May 2017, in Brasilia.

The virtual version of the book can be accessed at the link below: http://www.direitorp.usp.br/wp-content/uploads/2019/09/tecendo-fios-das-das-criticas-feministas-ao-direito-no- brazil.pdf 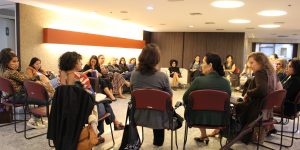 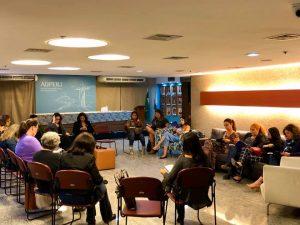