EXHIBITION “WOMEN, TIME AND VOICE – RIGHTS, ACHIEVEMENTS AND CHALLENGES” AT THE MUSEUM OF JUSTICE

Celebrating the 30th anniversary of the 1988 Brazilian Constitution, the Museum of Justice – Cultural Center of the Judiciary (CCMJ), located in the Old Palace of Justice, near Praça XV, inaugurated on January 30th the exhibition “Women,Time and Voice – Rights, Achievements and Challenges. ”

“The show is driven by the memory of four protagonists who echo the voice of so many other Brazilian women who played in that historic moment: Jacqueline Pitanguy (sociologist, president of CNDM from 1985 to 1989), Leila Linhares Barsted (lawyer, legal advisor to OAB Mulher, adviser to CNDM), Marques Porto (lawyer, coordinator of the Campaign“ Women and Constituent ”), and Schuma Schumaher (educator, executive secretary of CNDM and writer of the campaign“ Woman and Constituent ”). The four interviewees relive the encounter with feminism in the 1970s and 1980s, discuss violence against women and the current challenges of the feminist agenda. The show has a huge panel where the public can make selfies and thus integrate a march of the feminist movement. ”

Judge Adriana Ramos de Mello, head of the I Court of Domestic and Family Violence against Women, was one of the mentors of the exhibition. 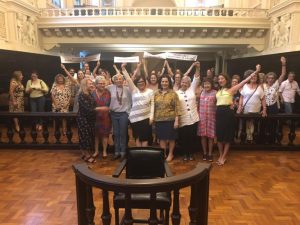 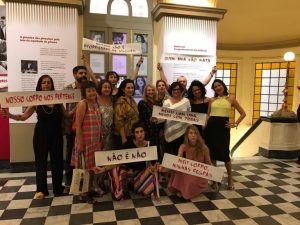 LAUNCHING OF THE PUBLICATION “TRAINING AND POLITICAL EMPOWERMENT MEETINGS FOR WOMEN: EXPERIENCES, RESISTANCE AND ACTION STRATEGIES

Women and the Legislature: Stories that intersect